Normally we wouldn’t review a restaurant a Disney park. The experience at Walt Disney World can be far ranging; sometimes far exceeding expectations, but often lowering them. It follows the yin-yang of a Disney vacation in that nothing is ever exactly how one wants it to be. Your only hope is to experience something far-removed from everyday life.

With “different” in mind rather than “good”, Be Our Guest Restaurant in the Magic Kingdom could be anything. Best to go in with an open mind. All we know is that’s it is incredibly hard to get into. Reservations we attained months in advance. This is not to say that it is popular. Unlike a hot New York restaurant, most diners will never have been there before and reviews are suspect at best.

It is hard not to get your hopes up when you arrive. The theming is incredible. It’s quite hard to believe the money and effort that went in to creating the facade of a castle sitting on top of a mountain. There is a strong urge to ask if there is a ride inside. After all, this is an amusement park. And people do ask. There is a kiosk (on the opposite side of a moat) meant to check reservations and to answer the question “Where is the entrance to the ride?”

The wide bridge connecting the park to the restaurant is quite ingenious. It removes the visitor from the traffic of the park and forces the sight-lines to show only the surrounding area that matches the Beauty and the Beast theme. In addition, it creates a substantial waiting area which is necessary when there is a 30 minute wait for your reserved table.

Inside, we were seated in the Ballroom, a cavernous space made more intimate by very low lighting levels. The ballroom has subtle special effects in the snow covered scene through the rear windows. Since we visited near the end of service, we also walked through the Beast’s West Wing which is chock-full of animated visual effects including a rose that in reoccurring fashion looses its petals and a painting that changes image.

But we are here to eat.

Be Our Guest seemed a bit apologetic about it’s menu. After all, it’s serving fussy French food to theme park goers. We had the Assorted Cured Meats and Sausages (a.k.a. charcuterie), French Onion Soup (no confusion here), Sautéed Shrimp and Scallops (a.k.a. lobster Newburg, without lobster), and Ratatouille (we know this one because Pixar showed it in a movie). All were great except for the Ratatouille which was undercooked, but quickly replaced with a perfectly prepared pork chop.

In fact, there was so much concern over the quality of the Ratatouille that we were visited by two managers. They were very concerned about keeping up standards and seemed to make it a goal to be the best in-park restaurant. Our waitress through all of it was fantastic.

To be clear, this is not fine dining. The surroundings are rich and detailed as to be themed like a palace, but the culinary goal is more brasserie in style. The service was efficient, but we were never rushed. The food was not composed of expensive products, but did not taste mass produced (an achievement for a 550 seat dining room). The wine wasn’t anything to talk about, but it paired well with the food. Overall, we had a relaxing meal that blew away our expectations. Reserve a couple hours to eat and walk around to see each room.

One warning: after a long day in the park and a couple glasses of wine, you will be tempted to buy a beverage in a blinking, color changing goblet. Try to resist. They don’t look as good in the light of day.

Disney’s Queen Victoria Room at Victoria and Albert’s wants to be the best, most overlooked restaurant in the country. Or maybe that’s what visitors of Victoria and Albert’s want to believe. After all, it’s really expensive. And it’s hard to get reservations. And the chef has been on a short list of possible nominees for a regional James Beard Award. So, where is the disconnect? 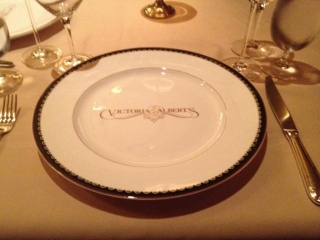 If your not a Disneyphile, you need to know that Walt Disney World in Florida has several excellent restaurants. Victoria and Albert’s is marketed as the best of those restaurants. The Queen Victoria Room is the inner sanctum of V&A’s where the most personalized service is given and the menu is limited to an expanded tasting menu. It is also the only Disney establishment that forbids children. So it has to be totally awesome, right?

First, we have to address the price. It is the most expensive meal we have ever eaten. There is only one way to rationalize this: Disney World is expensive, and some would say, about 20% overpriced for everything. The fact that V&A is more expensive than Le Bernadin, yet begs that it is unfair to compare it to New York restaurants can quickly be compensated by a completely rational (albeit fictitious) 20% discount.

There are only four tables in the Queen Victoria Room. It’s quiet. Maybe too quiet as we initially felt like we had to speak in a whisper so as not to disturb the other diners. Later the wine kicked in and to hell with the others who all looked like they were on their 20th anniversary.

Our servers, a man and a woman (not named Victoria and Albert) were the only people to serve the table. They were very pleasant and attentive. And this is where we encounter the first reason they have no Michelin stars: We have found that in the fine dining world there is a kind of shorthand used when serving food to people who know food. At V&A, every little thing is explained with an unnecessary bit of pomp and circumstance.

In Disney’s defense, we understand what they are up against. There are a lot of people who look to Disney to guide them though new experiences. To a large extent, Disney is travel without travel. Sanitized versions of foreign countries. Adventure without risk. If your experience with dining out is limited but you are intent on jumping into the deep end, this is your place.

One thing they got right: purse stools. Little ottomans for your handbag. Ruth gives this a big thumbs-up, declaring that all restaurants should have dedicated furniture to keep your purse discretely within reach. Sadly we learned that not every table is allocated a purse stool. Some are relegated to using a purse hook.

The food, however, is really good. With its basis in French, the cuisine also pulls from Asia and America. Each course was perfectly cooked and the pacing of the meal was good.

The flavors are not adventurous, but they did have some nice combinations. The chef leans toward comforting rather than surprising. Chicken liver pâté, Lamb and curry, salmon and soy. Nice cuts of meat with rich sauces. The presentation is pretty and simple. No molecular gastronomy. No French Laundry-esque play on words. Thankfully, it is also not based on Victorian era British food.

Service is unique in that the waitstaff is given a table-side task for almost every course. At times, this presents a nice opportunity to speak with the servers and learn more about the food or the operation of the restaurant. Unfortunately, the responsibilities of our waiter were limited to some fairly mundane tasks: warming croutons, shaving bonito, shaving truffles, and pouring sauces. The interaction seemed forced, as if, because it’s Disney we must include a bit of showmanship. A little bit is good. Knowing when to stop is what separates great restaurants from Victoria & Albert’s. 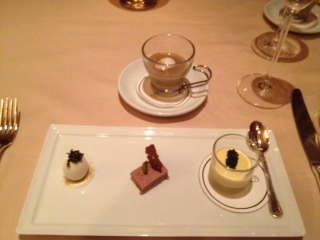 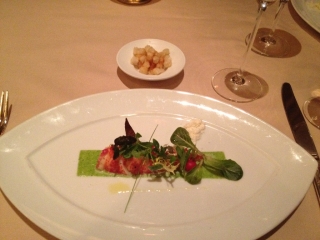 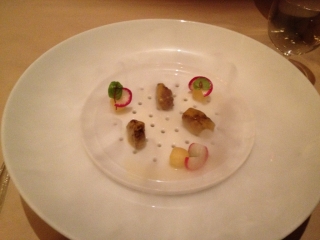 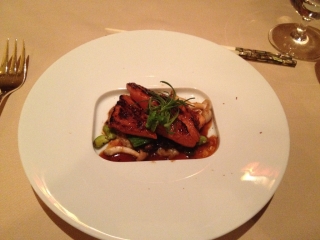 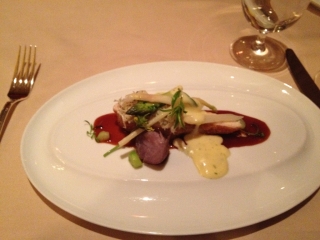 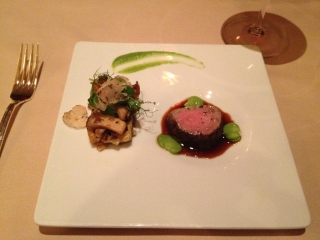 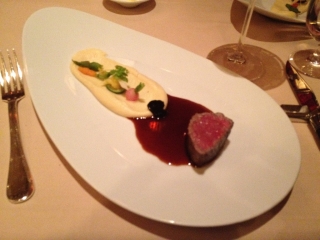 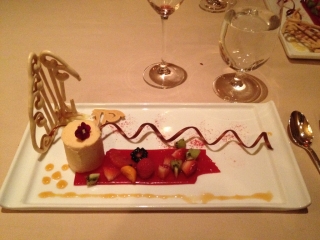 Lillian Disney hired architect Frank Gehry to design a symphonic music space in downtown Los Angeles in honor of her husband Walt Disney. Gehry was a favorite of previous Disney Corporation President, Michael Eisner. Several Disney corporate and theme park buildings have been designed by Gehry and given the Disney company’s and family’s connection to Los Angeles, his involvement in the Walt Disney Concert Hall project was apt.

But none of that is a reason for Ruth and Doug, in particular, to visit.

The reason we visited (and it is important to make a point here) is because it is a really cool piece of architecture and it has a free guided tour. That, combined with a three day layover on the west coast to moderate jet lag, gave us a good wintertime activity in LA. We did other stuff, too, but most of the pictures are of the Disney Concert Hall.

The Disney Concert Hall is significant in that the exterior has few, if any, right angles. It is a brilliant, literally shiny, centerpiece to a massive urban renewal project. Los Angeles did not have a large performance venue to rival the Met, so there was a movement to transform part of the city into a cultural Mecca.

Made of stainless steel, the exterior of the building is much like a theatrical facade. The sweeping curves are a freestanding cover that hides a more conventional interior building. The perimeter features cavernous “back stage” views of the structure. We got to see the exterior and lobby areas in detail, but sadly were not allowed to see the concert space itself. Unfortunate since we did not have time to see a performance.

Aside from the tour, we spent time hanging out in Santa Monica and Hollywood. Our suite at the W Hollywood (a fortuitous upgrade) was underutilized. We enjoyed dinner with our friend Chris and he questioned our choice of hotel as it is a renowned party spot. Indeed, the place was hopping and offered an entertaining walk through a line of bouncers to get to elevators, but we were there to avoid jet lag – not make it worse. We could have hosted a coke-fueled early morning after party with some of the revelers in the bar, but – oh yeah – we’re old. As to why we picked the hotel? It’s LA.

While we had no intention of doing anything “Disney” on this vacation we did end up spending a day at Disneyland. But only because Knotts Berry Farm closed all their good rides for maintenance.