The last couple of years has caused us to undertake a review of our technical capabilities. Too much had gone wrong or become unreliable. While the theme is usually our chief concern, this year the goal was to lock-down some of the basic building blocks of our theatrical show system.

The first item was video. The video is played back on a MedeaWiz Sprite with a DMX interface. We had tried to use video last year and it failed miserably because of a bad cable connection. It was a stupid problem to have, so that got addressed. But how to use it? A quick search of Halloween related videos on the Internet results in the idea of making bats fly out of the doorway.

Creating the video was fairly straightforward, but the key to making it feel creepy was in the audio. Without the sound, the images looked a bit like a Rorschach test. They needed that squeaky sound that bats make to add context. More importantly, it needed to sound like the bats were getting closer.

To make the bats sound menacing, multiple tracks were played across five channels of surround sound. The most distant chirping sounds were at the corners of the house. Closer-up were large wing flapping sounds nearest to the stairs. The wing flapping was not a real bat sound, but the idea of a bat flying close to your head.

The last channel was placed across the street. We used long-range Bluetooth to transmit the bats sounds to a speaker in our neighbor’s yard. This is a technical advance we will probably use in the future because it really messed with people. It was fun to watch people during the first three seconds of the video where they thought: There are bats. The bats are coming at me. The bats are everywhere.

One new piece of tech that we will definitely use every year was a new light beam trigger. We have used a light beam at the base of the stairs to start the show for years, but it always had the problem of re-triggering the show when people exited. We used to mitigate this problem by adding a delay before the show could be restarted, but that works only if people arrive at given rate.

The new trigger has two light beams. This is similar to the electronic turnstiles Disney used about a decade ago. A microcontroller board was programmed to check the order in which the beams were broken so we could determine the direction of movement. Going up the stairs starts the bat video. Going down the stairs made a cat screeching sound – just because we could.

Lastly, we upgraded our speaker system. The new speakers are more weather resistant and handle a lot more power. This was needed to reduce stress as much as wanting to improve sound quality. Rain is inevitable and this year was a perfect example. It was nice to have the speakers out all day in the rain without worrying about them. It was also nice to drive the smaller speakers by the stairs as hard a we wanted to.

The video below was mixed to be in surround sound, but YouTube re-mixes it down to stereo, so you can’t really get the full effect. Next time we invite you over, make sure to ask to see the version on the home server.

Seven years ago we had a Halloween party that involved the construction of a life-sized moving sarcophagus and half a dozen mummies. Since these things are just taking up space in the basement, we decided to reuse them this year.  Reduce, reuse, recycle. That’s our motto.

Except (always a dangerous word), we also decided that after last year’s success of adding interactive elements to the display, we would make the trick-or-treaters jump through some sort of hoop, metaphorically speaking.

This lead to re-watching mummy movies and discussing the appropriateness of using live spiders or beetles to make gags more “interactive”. In ancient Egypt, there were always insects or snakes that lived forever to protect the tomb of the Pharaoh. We should have the same, but the important part of the experience is the challenge one has to face before being thrown into the pit full of asps.

The challenge, we decided, would be to make the kids solve a puzzle. The movies always have a puzzle – translate the hieroglyphics, find the hidden lever on the wall, pull the lever – then run like hell when the floor opens up to a pit full of asps. Clearly, some of this idea has merit.

Here is where we get in trouble. Since the theme is set in a mummy’s tomb, the door, the buttons, and ideally everything else need to be made out of stone. Or something that looks like stone.

In building our sarcophagus, we had learned some things about carving foam and coating the foam with a hard resin. The picture above show the work-in-progress of making the buttons. Each foam button was cast over a 1/9th size steam table pan. The outer surface of the buttons were carved then the Foam Coat product was mixed with sand to create a hard textured surface. The foam could then be slid back over the steel pan to create a durable mount for each button. 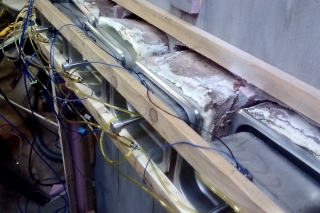 Each button was supported by a small pneumatic cylinder. This was done both to provide a pushing mechanism to reset the buttons and to provide some resistance as the buttons are manually pushed in. The air flow out of the cylinders was controlled so that it took some effort to press against a button. This added to the spooky “should I be doing this?” aspect of the gag. It also provided feedback to the control circuit so the sound of scraping stone could be played while the button was in motion.

Once the button was fully seated, a limit switch triggered the sound of a large stone coming to rest with a thud. The control system waited for all buttons to be set, then either played the sound of a door unlocking or the sound of rattlesnakes (it should be noted that we decided not to use real snakes). The buttons were then pushed back out by the air cylinders. 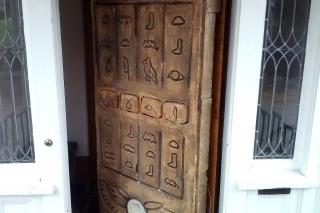 Since the Foam Coat seemed to be holding up, we decided to fabricate the entire door facade with foam. It had a wooden base that allowed the foam to standoff from the actual door far enough to give space for the button mechanism and to clear the door handle which was completely covered. Indeed, the only way to enter the house was for the door to be unlatched from the inside. 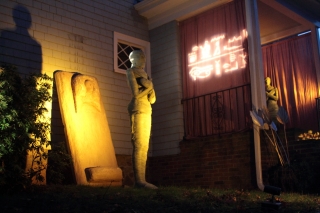 We had a bunch of ideas about the reward/penalty nature of the system. Given our time constraints, we didn’t really get much more done than the sound effects. Remember when this was all about reusing props from past years? We had one more goal and that was to make sentinel snakes hiss with waving tongues. It ended up be a subtle detail that was widely overlooked. On Halloween we barely had time to get the mummies out of the basement. 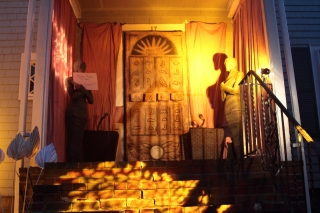 At its peak, there were about 100 kids and parents in the street. We had a line of willing participants jammed on the stairs. The wait was exacerbated by our having been merciless. No one got candy unless the the correct combination was set. When the door opened, kids in the front got served, then the door closed to the protests of the screaming children in line behind them. 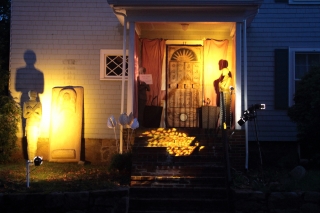 Forcing people to solve the puzzle was the best thing we could have done. There would have been no fun in gaining reward without accomplishment. Little kids got a thrill out of finding the solution. Older kids appreciated being able to manipulate what would otherwise have been static decoration. Only the parents of toddlers had misgivings. Adults don’t like to be put on the spot.

We learned a lot about human behavior, but some things remain a mystery. Most kids and parents patiently waited their turn. After all, it took only a few seconds to try a combination and there were plenty of people to help. But some people – parents and kids – walked past, stating they didn’t have time.

In conclusion, 207 kids received candy. Maybe 20 were denied. We tried to keep count, but at times things were out of control. The only down side to the whole event was that we had to be constantly vigilant with the opening of the door. Next year, creating a automated candy dispersal system will be a goal.

Thanks to all who attended, contributed, and took pictures. Clearly, we found the camera (and the skeleton) afterward.